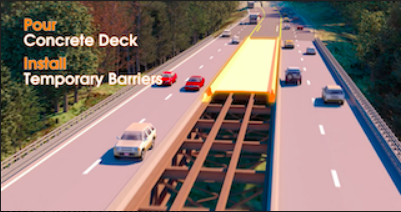 SALUDA—A 3-year project to widen and replace the decks of the 2 bridges over the Green River began this week.

The North Carolina Department of Transportation began an early phase of the project, which is set to be complete in late 2024.

“The Green River bridges are significant structures that are critical to transportation on I-26 between Asheville and Spartanburg,” Division 14 Construction Engineer Mitchell Bishop said. “We are taking this opportunity to perform preventative maintenance on the existing structure and also widen it to accommodate future traffic.”

The state awarded the contract to Flatiron Constructors of Morrisville, which was for $26.9 million. The construction will include building new lanes between the 2 bridges, removing old concrete and building a new deck in one direction, then repeating the process in the other direction, according to the NCDOT.

The contract includes that construction will be complete by Dec. 12, 2024 when the bridges will be 3 lanes on each side.

Drivers are urged to merge early, remain alert and obey all posted signs in the construction area.

A 90-second animated video of the construction project can be viewed at https://vimeo.com/309380340.