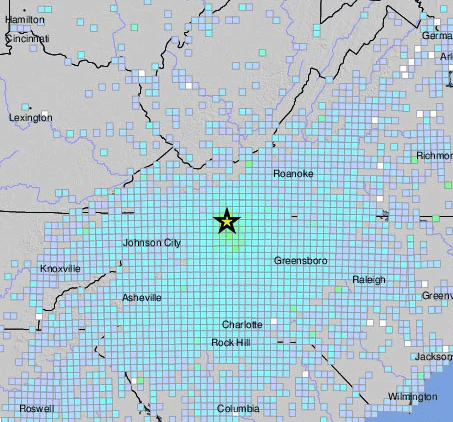 FOOTHILLS—Polk County and Landrum residents should have felt a good shake Sunday morning as the most powerful earthquake to hit North Carolina in more than 100 years was felt in the area.

A 5.1 magnitude earthquake occurred near Sparta, which is near the Virginia border, about 130 miles away from Polk County.

Many area residents took to social media immediately asking if that was just an earthquake. There was some damage in Sparta, but nothing reported locally from the quake.

The USGS said the earthquake occurred about 9.2 kilometers below the surface of the earth. The one felt in the area followed an earlier earthquake in the same area that was at 1:57 a.m. Sunday and recorded at a magnitude of 2.6.

Sunday’s earthquakes’ epicenter was about 2.5 miles southeast of Sparta, which is just south of the Virginia-North Carolina border.

There was also a 2.6 magnitude aftershock near Sparta that occurred at 1:57 p.m. Sunday.

The quake was felt throughout North Carolina, Virginia, South Carolina, Tennessee and some parts of Georgia, including as far as Atlanta, according to reports.

Some people in the area felt some earthquakes that occurred in March this year as well. There were 5 earthquakes in North and South Carolina and Tennessee within a 24-hour period, with the closest being near Flat Rock and the largest being near Centerville, S.C., which was a 2.4 magnitude. The one in Flat Rock was a 2.2 magnitude, according to the USGS.

A 4.1 magnitude earthquake struck near Edgefield, S.C. on Feb. 14, 2014 that was felt in the foothills area. The largest earthquake ever recorded in South Carolina was a 7.3 magnitude in Charleston in 1886.