Officials disagree with $64K in penalties, will appeal

MILL SPRING — Tryon International Equestrian Center was recently fined $64,437 by the North Carolina Department of Environmental Quality for water quality violations in streams, with TIEC officials responding they do not agree and will appeal the fines.

The DEQ’s Division of Water Resources submitted a civil penalty to TIEC on Dec. 12. There were eight violations of title 15A of North Carolina’s environmental quality rule, impacting approximately 11,438 linear feet of eight streams from sediment deposition, which resulted from land disturbing activities.

“We disagree with the fines, as we have worked diligently and consistently to manage the project, from the beginning, in a way that does not negatively impact the air or water quality in any way,” Decker said. “When issues were found, most often, they were self-reported, and we were immediately at work to correct any problems.”

TIEC has 30 days to pay the penalty, request for remission or file a written petition with the office of administrative hearings.

Decker said TIEC has had challenges with the rain and is working closely with the DEQ. She said TIEC has a person on the property monitoring all the streams daily. She also said TIEC has installed silt fencing, drainage fields and done grading work.

“Managing a site this large, with the record rainfalls we have received, is a daily process,” Decker said. “In this specific situation, all issues have been resolved and were resolved very quickly. We remain committed to the highest level of professional land management and environmental stewardship.”

Decker also said it is important to note that the fine was based on additional sediment in the water, not any type of toxins, pollutants or trash in the water.

DEQ officials said TIEC was ordered to remove the sediment,  and that was mostly done as of early December.

The area has seen almost record rainfall since last year. Tryon, the official recording station for Polk County with the National Weather Service, recorded 88.14 inches of rain in 2018, which was more than 20 inches above normal.

TIEC hosted the World Equestrian Games in September and had heavy rainfall during the two-week games, which caused some issues, including event cancelations. 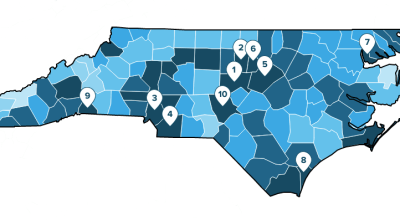 Another dining option is open in Columbus

No charges in Saluda shooting