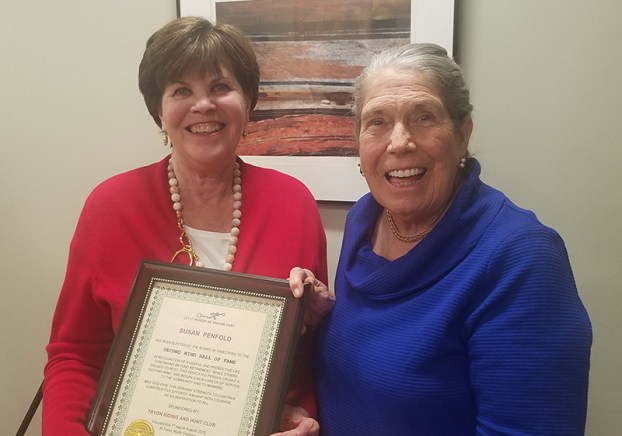 Linda Lee Reynolds (right) presents Tryon Riding and Hunt Club board member Susan Penfold with a plaque recognizing her induction into the Second Wind Hall of Fame. Penfold was recognized for her various volunteer contributions in the local community. (Submitted photo)

The Tryon Riding and Hunt Club became the first organization to sponsor a member into the Second Wind Hall of Fame this year.

Susan Penfold, a TRHC board member, was inducted into the Hall of Fame at the Hunt Club’s annual meeting, held at the Tryon Fine Arts Center in December.

Penfold and her husband, Bob, moved to Tryon in 2006.  As soon as she arrived, she became active in the community and she has not stopped.

Penfold received her bachelor’s degree from the University of Tennessee and did graduate work at Florida International University.

Volunteering is nothing new to Penfold. Her life’s work is being a wife, mother and grandmother and volunteering whenever needed.

She served as an elder and member of the session at Tryon Presbyterian Church for six years, acting as their membership chairman. She also served as president of the American Association of University Women for six years.

Penfold is known for her needlepoint work and gardens.  In her spare time, she likes to play bridge and travel.

Her passion is also taking care of her grandchildren.

Penfold is a Master Gardener and would like to be remembered for her community service and as a loving wife, mother, grandmother and good friend. The Second Wind Hall of Fame is proud to honor Susan Penfold as a new member, representatives said.

The Second Wind Hall of Fame is a 501(C)(3) organization that honors outstanding volunteers who have retired but continue to contribute to the quality of life in the community. 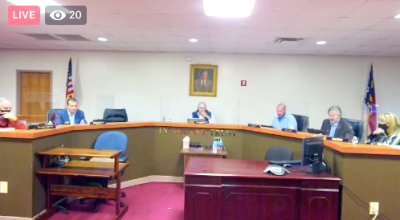 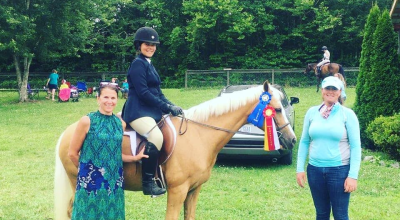