Coming home to rest in Landrum 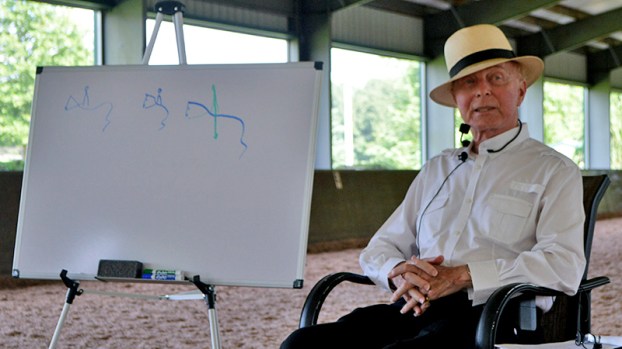 LANDRUM — “We have a starvation for knowledgeable equestrians that can teach classical training,” author, dressage judge and clinician Charles de Kunffy said in a clinic last Saturday and Sunday.  de Kunffy said the days of traditional riding academies that taught horsemanship along with other values such as integrity, morality and virtue, are dying out.

Team Tate Dressage sponsored de Kunffy for the weekend clinic at the Blue Ridge Farm in Landrum. Riders and auditors from as far away as Atlanta and Chicago came to learn from the classically trained master. On Saturday afternoon, de Kunffy gave a short lecture and answered questions from clinic participants and the public.

de Kunffy grew up in Austria-Hungary during WWII and the Hungarian Revolution. He trained with instructors from some of the premiere classical riding schools in Europe. In addition to being a US Equestrian Federation “S” dressage judge and a US Dressage Federation Hall of Fame Inductee, de Kunffy is the author of six books including “A Rider’s Survival from Tyranny,” Training Strategies for Dressage Riders,” “Dressage Principals Illuminated” and more.

The theme of body, mind and spirit was an integral part of de Kunffy’s Saturday’s lecture. “Riders are human. This means body, mind and soul,” he said. “Most instructors today just teach the body.”

De Kunffy said riding is a metaphor for life lived well. He added that we have so much to learn from horses if we will just listen. “Its not enough to know the bits and pieces of your art,” de Kunffy said. “In riding and in life, you have to know the ideal you are working toward. The ideal is much more than the composite parts.”

Clinic sponsor, J.J. Tate, of Team Tate Dressage, has studied with de Kunffy since she was 11 years old. Tate takes de Kunffy’s teachings to heart, believing that horses can teach us a great deal about life as well as good horsemanship. Tate not only passes on de Kunffy’s teachings to her students, but works to promote the values of classical training by sponsoring de Kunffy and other clinicians who train in classical horsemanship.