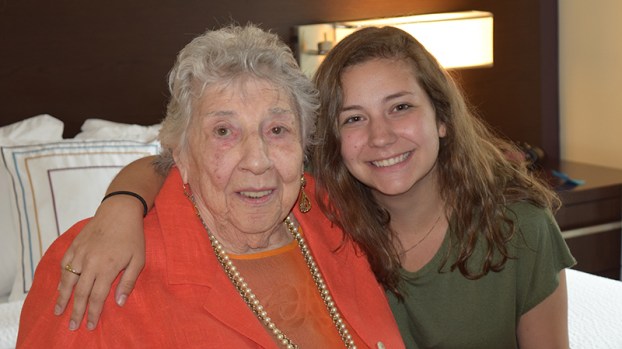 Tryon’s Terry Catalano poses for a photo with her granddaughter, Rachel. (Submitted by Jack Catalano)

Recently, Terry Catalano, of Tryon, traveled to Charlottesville, Virginia, to see her youngest granddaughter, Rachel Catalano, of Columbia, South Carolina, a graduate of the University of Virginia.

For Catalano, the spring semester’s biggest challenge was finishing a senior thesis in the college of arts and sciences while also battling quantitative finance in the McIntire School of Commerce.

Her grandma had her own obstacles to overcome, however. Terry was hospitalized in February and stayed at Rosecrest for all of March. All through rehab, Terry would tell her physical therapists that she was going to go to Rachel’s graduation.

After six weeks home doing exercises, her recovery was highlighted with a trip to Charlottesville.

Catalano is the daughter of Jack Catalano, of Columbus. She served all four years on class council, participated in an investment club, Smart Woman Securities; volunteered at Ronald McDonald House; earned a certificate in finance from University Bocconi, located in Milan, Italy; and mentored underclassman commerce students. Catalano earned both a Bachelor of Science in commerce and a Bachelor of Arts in global studies.

President Sullivan commented at commencement that the undergraduate class of 4,000 contained 24 National Merit Scholarship Winners, one of which was Catalano, out of Irmo High School.

A challenging spring semester ended in a graduation celebration and now on to a vacation traveling through Europe with her older sister and mother.

Upon her return, she will relocate to Boston and begin work at Bain & Company as an associate consultant. Previously, she interned at both S&P Global and Capital One.