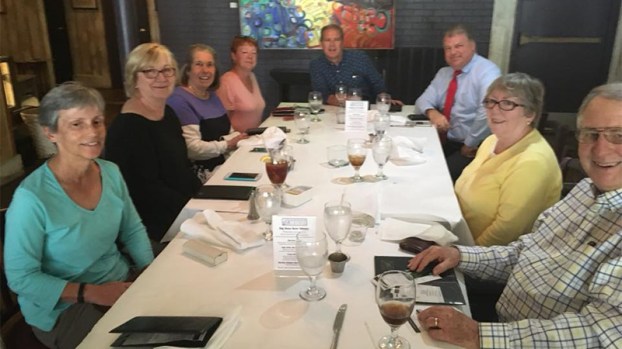 Members of the local community enjoy a meal at Lavender Bistro, in an effort to support the business during the ongoing Tryon streetscape construction project. Pictured are, from left, Kathy Toomey, Allison O’Steen, Linda Lee Reynolds, Anne Day, Scott Lane, Ronnie Reid, Wanda May and George May. (Submitted by Jamie Carpenter)

TRYON — Over the next several months, visitors to Tryon’s historic downtown will have a chance to team up with others in the community to support the restaurants and shops that call the district home.

Jamie Carpenter, executive director of the Tryon Downtown Development Association, is organizing a series of “cash mob” events, which will take place the third Wednesday of every month through August. During these events, the community is encouraged to “crash” a particular downtown restaurant for lunch, and will join others to shop at a chosen store or stores following their meal.

The following are the dates and locations of the upcoming shopping sprees:

• Aug. 15: Lunch at 10 North Trade; shopping at A Taste of Olives and Grapes next door.

“We are making sure that folks are aware of everything we have in town, and to come check them out,” Carpenter said. “We have to support what we have here, if we want to continue to have a thriving downtown like we had and continue to be.”

Carpenter organized one of these cash mobs last month, where she invited members of the TDDA board and others in the community to spend an afternoon dining at Lavender Bistro, followed by a visit to The Book Shelf. Both businesses were closed for two days in April due to the ongoing Tryon streetscape construction project, which is making improvements to the sidewalks in front of several businesses along North Trade Street.

While downtown business owners affected by the construction recognize the value the finished pavement will add to downtown, the construction has caused a decline in sales for many retailers compared to this same time last year, Carpenter said.

With that in mind, Tracey Daniels, with the Tryon Coffeehouse Co-op, invited a few of her friends to enjoy lunch at Lavender Bistro, to help give the restaurant a boost during a slow period of business, Carpenter said. Inspired by the idea, Carpenter invited members of her board to make their own lunch appointment at the business, as well as to stop at the nearby bookstore.

“Even buying just a little something makes a difference when business is real slow,” Carpenter said.

Seeing the impact the first cash mob had, the TDDA director organized a second mob in April, where people were again invited to dine at Lavender Bistro. Afterwards, the group stopped by Southern by Design and Hidden Spirits, another two vendors which had to close for  several days due to sidewalk construction.

Carpenter also set up dates for future cash mobs throughout downtown this year, including at businesses that are not directly affected by the streetscape project. The director said that the events will help show local business owners that the community supports the time and energy they pour into serving a small town like Tryon, as well as to help open visitors’ eyes to the array of diverse and interesting merchants who line the streets of downtown.

“If these businesses aren’t here, we will have nothing in our downtown,” Carpenter said.