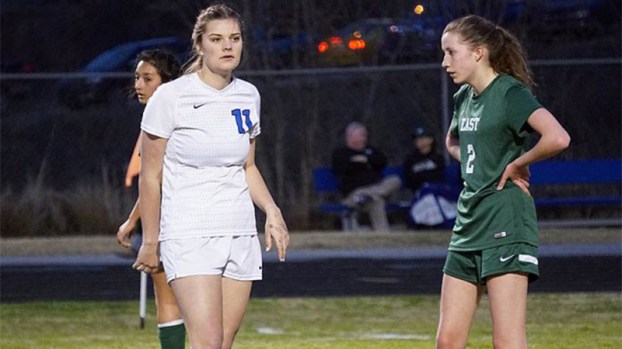 Polk County senior Kendall Hall had one of the Wolverines’ three goals in Monday’s win. (Submitted by PolkSports.com)

Neither wind nor cold nor Madison could knock Polk County’s girls soccer team out of the Western Highlands Conference title chase on Monday evening.

The Wolverines jumped out to a quick lead and made the advantage stick, downing Madison 3-1 in a key conference battle in a chilly G.M. Tennant Stadium.

The temperature dipped to 40 degrees by the end of the match, and wind gusts played havoc with play throughout the evening, any shot kicked high in the air likely to be affected. Loose sideline jerseys and extra soccer balls were occasionally blown onto the field.

But the conditions did not stop Polk County from improving to 7-6 overall, 4-1 in conference play, and dropping Madison out of second place to 4-2-1, 3-2.

The Wolverines trail Owen by a game and host the Warhorses on Wednesday in a showdown for the conference lead.

Polk County needed just five and a half minutes to score Monday night. Reese Alley drove nearly to the end line on the right wing before rolling a cross through the Madison defense to Lauren Ketwitz, who tapped the pass into the net from point-blank range to give Polk a 1-0 advantage.

The Wolverines struck again with 11 minutes left in the half as Baylee Love garnered a rebound off a deflected shot and stuck it into the right corner of the net, giving Polk a 2-0 lead at the break.

The Polk defense largely kept Madison at bay, the Patriots getting few shots on goal throughout the two halves. Kendall Hall then added to Polk’s lead in the 77th minute, making it 3-0, before Madison’s Haley Patterson tallied with 12:47 remaining to account for the final margin.