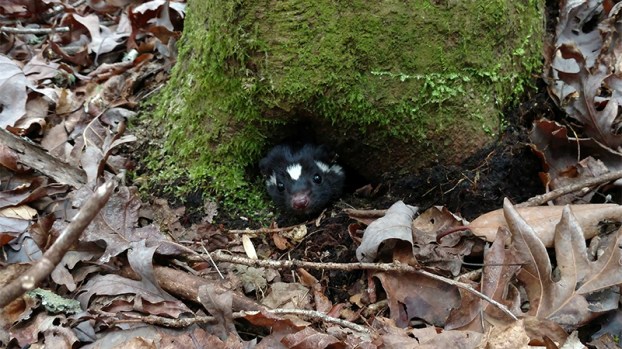 A talk about Eastern spotted skunks will be the program at the next Conserving Carolina lecture on April 26. (Submitted by Pam Torlina)

Conserving Carolina and the Landrum Library invite the public to attend a free program titled “The Cute and the Cryptic: Eastern Spotted Skunks in the Carolina Appalachians,” presented by Robin Eng, a graduate student at Clemson University.

Eastern spotted skunks (Spilogale putorius) are a squirrel sized mephitid (member of the Mephitidae family), easily distinguishable by four broken black and white stripes that run the length of their body and bushy white-tipped tail. If you’re lucky (or unlucky) you might even see a spotted skunk perform its characteristic “handstand behavior” — a defensive gesture made just prior to spraying as a warning for predators to stay back.

Although they were once a common furbearer species throughout the Eastern United States, spotted skunks have been in decline for decades, and have only just become the focus of intensive research efforts.

In this presentation, Robin will discuss the history and ecology of Eastern spotted skunks, outline ongoing research that is occurring in Carolinian Appalachians and identify ways that the community can assist us in collecting and reporting biological records of the elusive Eastern spotted skunk.

The lecture is part of Conserving Carolina’s monthly Speaker series at the Landrum Library.  The next program will be held on May 8, when noted naturalist, historian and outdoor writer Dennis Chastain will present on “Native American Rock Carvings of the Carolina Mountains” at 6 p.m.

Conserving Carolina will be leading a hike to the petroglyph site on Friday, May 11.