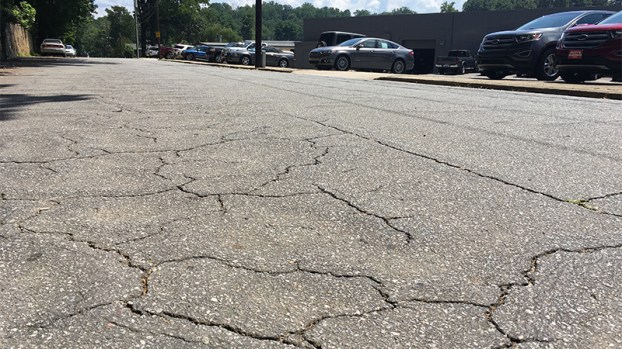 Some Tryon commissioners questioned staff last week as to why improvements to Howard Street have not begun. The town approved resurfacing and work to underground infrastructure last year. The town put the improvements on top of its priority list. (photo by Claire Sachse)

Council met on Tuesday, Aug. 15 and during the manager’s monthly prioritization report, commissioners questioned what is taking so long in getting the Howard Street improvements done.

Commissioner Bill Ingham first brought up that he wants Howard Street on the town’s prioritization list.

Commissioner Crys Armbrust then asked why the town has put the project off so long.

Ingham said he thinks it’s because the town is going to have to pull men off other projects to do the project in house.

Town manager Zach Ollis said the town put enough in the budget to do everything on Howard Street.

Armbrust asked why the process has been bogged down. Armbrust expressed frustration that the town approves projects months and sometimes years before they are implemented. Armbrust said in at least one case, people have died before projects they donated money to are ever done.

“Why are we not moving forward?” Armbrust asked. “We clearly have the money. A decision has to be made. Are we going to bid it out or do it in house?”

Armbrust said he thinks the town approved the Howard Street project in November 2016.

Ingham said taking former public works director Gary Walker out of the equation was what hurt the project. He said he understands the town has a manpower shortage and there’s nothing else he’d like to see but for Howard Street to be paved.

Kempton said with the loss of Walker, the town lost the expertise.

Last year, Tryon approved repaving Howard Street and doing infrastructure repairs to the water and sewer lines underneath. Walker resigned from the town last year and has not been replaced.

Ingham said the town needs to start looking at the number in between, or the difference between doing the project in house or having a company do it.

Ollis said if the town cannot use Walker, it would take an engineer to move the pipes and that’s when the project gets expensive.

Council discussed having Ollis talk to Walker to see if he could be contracted to help on the project in order to complete it in house.

Commissioner Chrelle Booker also mentioned that she wants improvements to Aspen Street on the top of the town’s priority list.

Council agreed to have the Howard and Aspen Street projects placed at the top of the priority list.