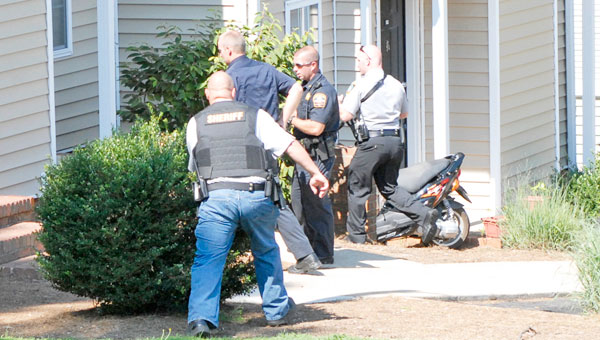 Officers from various departments search a neighborhood near Medicap pharmacy in Columbus for Michael Bolling after he robbed the pharmacy in August 2011. (photo by Leah Justice)

Sentenced to 15 to 20 years in prison

Michael Spencer Bolling, 33, of Tryon pled guilty this week in Polk County Superior Court to several charges in connection with the 2011 armed robbery of Medicap Pharmacy in Columbus.

Bolling was sentenced to 84 to 110 months (7-9 years) in prison for robbery with a dangerous weapon and 96 to 125 months (8-10 years) for two counts of attempted trafficking opium or heroin, felony possession of schedule II controlled substance and maintaining a vehicle/dwelling/place for a controlled substance, according to court records.

The prison sentences are to run together consecutively.

The guilty plea and sentence came almost exactly two years following the incident. On Aug. 16, 2011, the Columbus Police Department responded to a report of an armed robbery at Medicap at 10 a.m.

Reports were that the suspect had entered the pharmacy wearing a ski mask, stated he had a gun and demanded prescription medication, according to police reports. The suspect left on foot and later fled the scene in a vehicle.

The investigation immediately included several law enforcement agencies with officers apprehending Bolling on Will Green Road in Green Creek just before 1 p.m. on Aug. 16, 2011. During the arrest, a portion of the medication taken from the pharmacy and items used in the robbery were recovered.

Bolling was originally charged with robbery with a dangerous weapon, two counts of second degree kidnapping, two counts of trafficking opium and one count of felony maintaining a vehicle for a controlled substance.

Officers identified Bolling with information gained through interviews, then found Bolling’s vehicle at the residence of Anthony Dion Constance, who was also arrested in 2011 but not in connection with the actual robbery.

When officers arrived at Constance’s residence, Bolling had left but was captured within Constance’s neighborhood.

Help us help you

Fruits of our labor

We hope to see y’all when it’s all over

Protecting those who need protecting